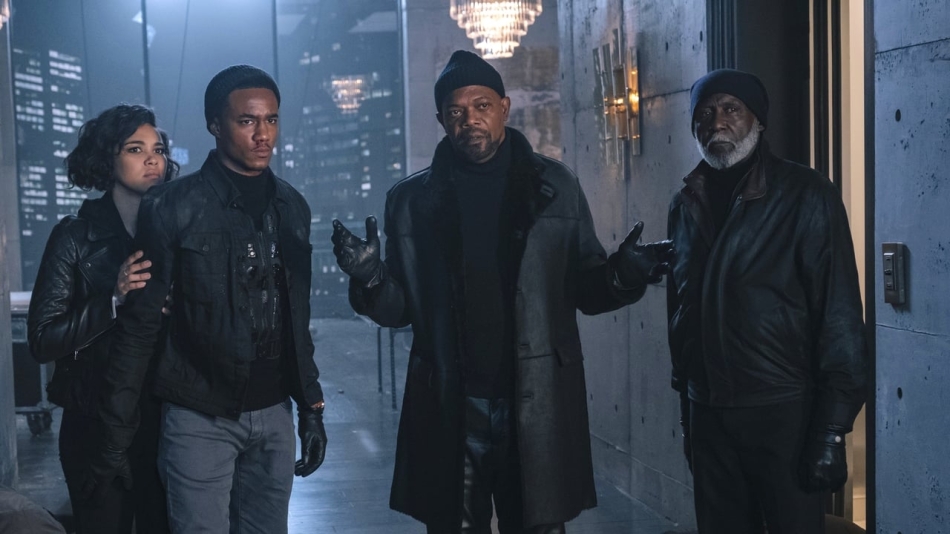 What’s going on Plotaholics? Its Bryan again, and I’m going to be serving you guys up a LONG overdue review on the fifth film in the Shaft series that began with the 1971 film Shaft starring the great Richard Roundtree in the titular role. Roundtree carried the series for two more films: Shaft’s Big Score in 1972 and Shaft in Africa. The series then moved to television. The series also starred Roundtree from 1974 to 1975.

Twenty-five years later, Samuel L. Jackson would take over the role of John Shaft (known as John Shaft II) in the 2000 film, Shaft, which co-starred Vanessa Williams (Soul Food), Christian Bale (The Dark Knight trilogy, The Fighter), and Richard Roundtree, once again reprising his role as John Shaft. In this film, Jackson’s Shaft is the nephew of Roundtree’s Shaft, just named for him. At the time, this irked me off like mad. More on this later.

The fifth film in the series, Shaft, stars Jessie T. Usher (The Boys) as John “JJ” Shaft, Jr.–the son of Samuel L. Jackson’s John Shaft. Jackson reprises his role as John Shaft, who returns in this entry to help help his son solve the murder of his childhood friend. Another newcomer to this series is Regina Hall (Scary Movie franchise) as JJ’s mother and Shaft’s ex-wife. Alexandra Shipp also co-stars as JJ’s childhood friend and love interest, Sasha.

Unfortunately for me (or fortunately, I suppose), Shaft was before my time. However, I was not immune from the cultural impact of Shaft. He was the cool cat, black hero that kids like me needed to have in the 70s to look up to. Shaft was different from so many of the black heroes of the Blaxploitation era. He was more than cool. He had a damn theme song named after him, man! He didn’t so much speak jive, as he was too cool to let himself fall into the stereotyping, pop culture BS. He was just…Shaft. Richard Roundtree was the perfect man to play him at the time because Roundtree was all of these things, seemingly without having to put forth much effort.

Samuel L. Jackson, in my opinion, portrayed these traits in the 2000 film. He was tough, smooth, and he was believable as a hero, just like Roundtree. He wasn’t without his faults, but he always got the job done and you damn sure didn’t want to cross him.

The 2019 film shows Shaft and Maya arguing with baby JJ in his car seat when a shooting takes place. Shaft handles the attackers in his typical cool manner, however the danger to his son is more than Maya can handle, so she leaves John and takes their son. We are treated with a funny, albeit difficult montage of John Shaft playing the absentee Dad trope during JJ’s life, including giving a rather ‘adult’ gift when JJ becomes a teenager.

We also meet JJ’s friends, Karim and Sasha, who befriend him after he’s being bullied in school. The trope of the apple-falling-far-from-the-tree is evident each time JJ and Shaft are on screen. JJ is no slouch himself; he’s just not physical like his father and the original John Shaft

The story here isn’t brand new;  the younger Shaft is a computer analyst for the FBI that is disrespected and disliked by his supervisor. When he discovers that his best friend, Karim, is murdered, JJ doesn’t believe the story given by the police. So JJ enlists the aid of his father, the legendary John Shaft to help him discover the truth behind his friend’s death. Lots of action, wit, and sexual innuendo ensues.

Now I just mentioned that this film plays up the mismatch of the personalities of John Shaft and JJ Shaft. This film also makes use of another action movie trope: the “man out of time that won’t adapt” trope.

Jackson’s Shaft lives in the days of tough guys that thrive on the fight, and then have sex with the beautiful woman that witnessed the whole thing. Among the only leading men in Hollywood that can do this and do it well is Jackson. He, himself, is old school as all hell and it comes off in interviews, so it makes sense that he plays an old school guy in a new school, PC world. While its funny at times, it isn’t for everyone.

Its fun to watch JJ come into his own with his father, and the original John Shaft. Yes, Richard Roundtree returns and does his thing as only he can in this film. The chemistry among the cast is truly amazing to watch and only comes across because of the talented cast. Jackson and Hall’s chemistry is especially great, even though I know the age difference between the two is twenty-two years, you believe they used to be married, and it’s pretty good stuff.

Usher and Shipp are a pretty nice pairing on screen. It is fun to see JJ and Sasha interact when he’s timid to when he gains more confidence. While neither of them are my personal ideal pairing, they do a rather decent job. I personally think that Zoe Kravitz would have been a better pairing along side Usher. If we are keeping Shipp, I wouldn’t have minded John Boyega in the role of JJ.

While the story isn’t reinventing the wheel, that’s not a bad thing. This is a film that’s meant to be fun, and I can personally see that Jackson is having a ball and bringing his best. Usher is having a good time as well. For some people, the “old school” methodology that Jackson and Roundtree bring into the world as it seems now…it feels archaic, and I believe it’s meant to. They are meant to feel out of place, but still getting the job done. At its core, this is about an estranged father and son reconnecting. It’s never too late, even if it may feel like it is.

As far as rating this film goes, this is the hard part.

Can my love for the cool cat that’s a sex machine with all the chicks (SHAFT! Right on!), Jackson, allow me to point out what’s also wrong with this film?

While the critics hated it, and the box office wasn’t kind, fans love it. If you don’t believe me, head over to Rotten Tomatoes. It got a critical score of 32% and that’s from a review of 123 critics. Audience score? 94% from 7,727 verified audience member scores.

While I haven’t voted, I’m willing to give Shaft 2019 a 2-shot rating. And the only reason why I’m giving it 2 shots is because of my feelings on just a few scenes that felt a little…forced. But those scenes do not take away from the overall fun.