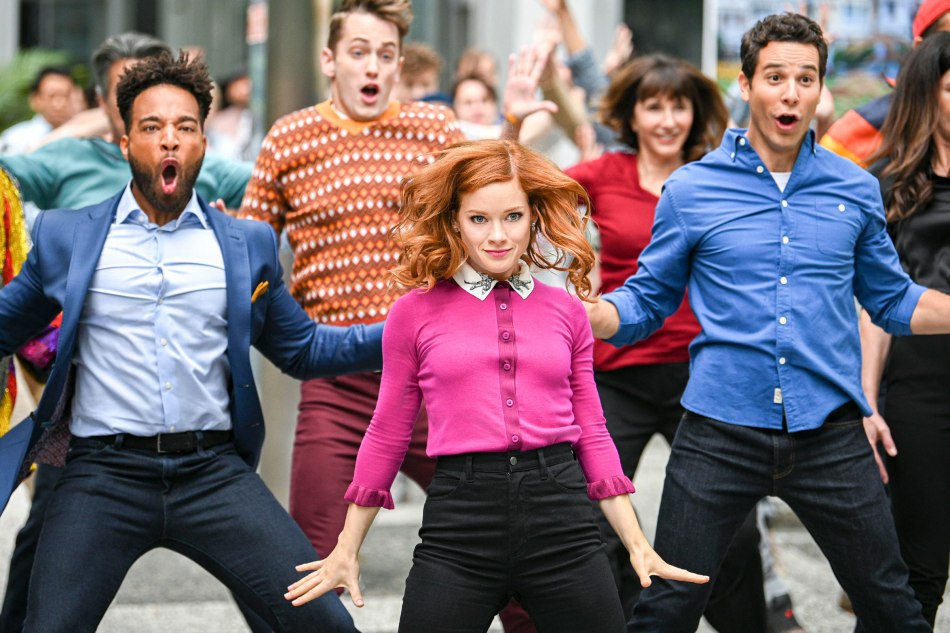 The following article contains spoilers for episode one of Zoey’s Extraordinary Playlist, “Pilot.”

Hey there, Plotaholics! Shane here. NBC launched their mid-season, high-risk series, Zoey’s Extraordinary Playlist, this week. We’ve decided here at The Plotaholics that we will be providing a week-to-week recap of this series, much like we did for The Mandalorian. So, strap in, folks. Here comes some sweet, sweet recap action.

Zoey’s Extraordinary Playlist opens with a close-up shot on our protagonist’s face. Zoey (Jane Levy) is sleeping, but not for long. She wakes up because of some wildly loud singing coming from next door. This is a totally appropriate and metaphorically sound way of opening the series, since music will (very soon) trigger Zoey’s own awakening of sorts (that doesn’t just involve waking up from sleeping).

Zoey readies herself for work and stops off at her across-the-hall neighbor’s, Mo’s (Alex Newell), to ask if they wouldn’t mind bringing down the energy and volume of the morning routine. Mo promptly asks Zoey what kind of music she would prefer, and as Zoey walks down the stairs to head to work, she puts her earbuds in and the viewer is let in on a little secret–Zoey listens to PODCASTS! (Gasp! Though, I would like to suggest one to her that she might enjoy.)

Zoey works as a coder at a software company or something in San Fransisco, and she’s up for a big promotion against a bunch of the guys in her office, including her best friend, Max (Skylar Astin). Her software office is also populated by a classic misogynist, Tobin (“I thought you would be doing your nails together”), and a Zoey’s professional rival, Leif.

Zoey interviews with her boss, Joan (Lauren Graham), for the management position, but she fails in this first interview to make much of an impression. Joan is clearly impressed with Zoey’s work, but she needs to see more out of Zoey’s management style. Don’t worry, though, the software they are working on launches in 3 1/2 days, so there is still plenty of time for Zoey to figure it all out just in time.

The last bit of business to take care of here at work is Zoey’s crush, Simon (John Clarence Stewart). Simon is tall, dark, and handsome. He seems happy at work, and he frequently can’t decide between cereal that is too sweet that it makes him crash or too healthy that he will hate eating it. Zoey isn’t much making a move on him, though, because her dating history is apparently littered with mistakes.

Elsewhere, we are introduced to Zoey’s family. Her father, Mitch (Peter Gallagher) has fallen ill with a rare neurological disease called “rare neurological disease.” His condition is poor. He has to be spoon-fed, and he can’t communicate. He is being taken care of by Zoey’s mom, Maggie (Mary Steenburgen), and her brother, David (Andrew Leeds).

That pretty well sums up our main cast and their relationships. There is a lot of this work done in the first hour of the show, but that isn’t unusual, either. A pilot is saddled with the unique challenge of introducing a world, introducing the characters that populate that world, and providing a strong-enough opening story to hook viewers. It’s a tall order for any series, but something unique like Zoey’s is having to work overtime as an origin story for unique abilities as well.

Zoey expresses worry to her mother. She’s been having headaches, and part of her is worried that she may be developing what her dad has. Her mom talks her into having an MRI “just to make sure” everything is okay. At the MRI, the tech offers to put on some music to help Zoey relax. “We have everything,” he says. “Spotify, Apple Music, [blah], and [blah].” While Zoey is in the tube, a big earthquake knocks San Fran around a little bit and [somehow] all of the music (in the world? ever?) is dumped into her brain, altering her brain patterns.

Later, on the street, we have the awkward “superhero-discovers-her-powers” scene. Zoey hears a woman singing “All by Myself,” but she isn’t moving her mouth…not at the beginning anyway. Soon, Zoey is seeing the woman sing, hearing and seeing three women sing “What a Man” while they check out an attractive runner, and she is finally forced to endure a city-spanning flashmob to the Beatle’s classic “Help.”

Ultimately, Zoey theorizes (with some help from Mo) that she might be hearing people’s innermost thoughts through the form of song. She hears the usually-chipper Simon singing the Gary Jules classic (cover) song, “Mad World” late at work one night.

Here is where the potential arch of Zoey’s character snaps into view. The show seems to be establishing a classic “guardian angel” trope. Zoey can hear when people are hurting, and she can use this knowledge to help them.

She reaches out to Simon as a result of the sad song she hears, and she discovers his father recently committed suicide. If you’re having a hard time getting your head around this premiere episode, this is the moment you have to wait for. This is where the show is able to settle down and breathe for a moment. In these quiet moments, the show is at its best.

Back at work, we sit through a software coder rendition of “All I Do Is Win” which has to be the most awkward white-guy-hip-hop-slash-r-and-b-musical-cover since Will Schuster did Sisqo’s “Thong Song” on Glee.

Later, Zoey sits alone with her father. She wants to find a way to make him feel happy and like himself, even if he can’t express it. As she looks into a framed photograph of the two of them on a boat from years ago, her father begins to sing to her (“True Colors”), and it is the most emotionally poignant moment of the pilot by a long shot.

The episode ends with Zoey’s sailboat trip with her family, and (Surprise!) she solves the bug in the software she’s working on. She gets an approving look from her boss, so things look good. The final beat of the episode comes when she realizes her best friend is in love with by overhearing his thoughts in the form of “I Think I Love You” by The Partridge Family.

So that’s a lot for any episode of television, and this episode of television in particular gave me whiplash on a few fronts. There were moments when I thought this was going to be an abomination of a TV show. Then, there were moments when I felt like the folks at NBS struck gold. I’m incredibly conflicted about how to feel about this show, which is probably why I decided to do weekly recaps.

The biggest problem with this series so far is, without doubt, the rules of the world Zoey inhabits and the rules of the powers she possesses. If the singing she hears belongs to people’s innermost thoughts, there is no reason a group of people should be singing the same song. There is also no reason for large groups of people to break out into choreographed dance numbers. If she is hearing their inner monologue, that monologue should have no effect on the physical world, but here, it does. And in incredibly annoying and illogical ways.

If she is experiencing these “visions” in a trance-like state (which is the only way to really account for some of these production numbers), then what are the people she is listening to doing in the meantime? Is she just looking blankly at them for three minutes while she has a vision of them singing and dancing (and not rapping)?

Finally, how does she hear so many people singing without intending to, and suddenly not hear anyone? There has been no explanation for her learning to control it (and she hasn’t learned to control it). Right now, the ability is just a plot device to use when NBC has the rights to a song that would work.

But when the show works, oh man, does it work. In those quiet moments with Simon and Zoey’s father, the characters seem real, and the power seems believable. In one-on-one moments, it’s easier to believe what is happening within the rules of the universe as they have been established so far.

So where does Zoey’s Extraordinary Playlist go from here? If it’s going to be as strong of a show as it could be, it has to find a way to more clearly define the reaches and limits of this newfound ability. Of course, Zoey doesn’t understand, and she hasn’t found anyone else who understands it either. Without that guide to provide the viewer with the “rules,” it’s going to have to be a process. I would like to see the show explore that process a bit, though.

The problem with the premise as it’s stated is this: we all think all the time. Zoey’s life should be a constant barrage of terrible voices singing at random about terrible things. There should be so many voices that she can’t decide where each one originates. It should be chaos. I need to know why it’s not. And I need to know why these insights and premonitions take this exact shape–singing and dancing. Listening to a bunch of music in an MRI machine during an earthquake isn’t enough. They weren’t plugging her into an MP3 player. How did this affect her so much?

Finally, I fully expect that episodes moving forward will be stronger (even though that moment between father and daughter will be hard to beat) simply because the hard work has been done. Even if how she got the inability is kind of dumb, we can move on now. But the show does have to find a way to make the rules of the power more clear.

Zoey’s Extraordinary Playlist airs on NBC and can be streamed on Hulu. Episode 2 debuts February 16, 2020.