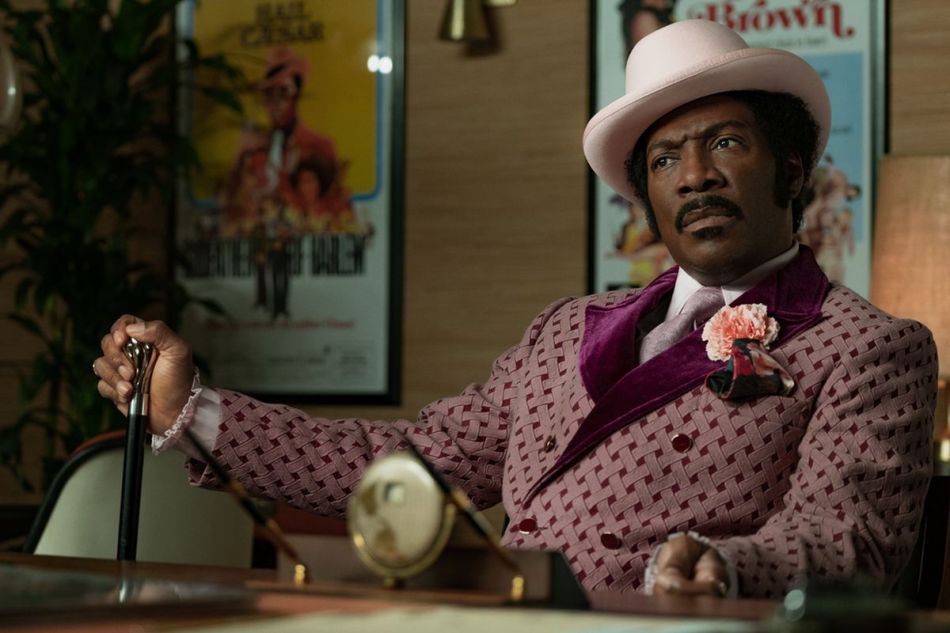 The Eddie Murphy comeback train is going strong. First there was Murphy’s appearance on Jerry Seinfeld’s Netflix show, Comedians in Cars Getting Coffee, which garnered major acclaim from fans. Then the announcement of a potential Netflix series of stand-up comedy specials got people excited. Then there was the announcement of Coming to America 2, and now we’ve got one of the most hilarious biopics I have ever seen: Dolemite Is My Name.

In this film, Murphy plays the late, great Rudy Ray Moore–a struggling stand-up comedian, living in the 1970s, who has big dreams, but no way to make his dreams a reality. While working in the local record store he manages, a homeless man comes in and captures Moore’s attention with an impromptu performance.

After bombing during another stand-up routine, Moore finds the homeless man in an alley and decides to listen to him and learn his stories. After learning from the homeless stranger, Moore’s career takes off. He and his friends–played by Keegan-Michael Key, Craig Robinson, Mike Epps, and Da’Vine Joy Randolph–work to build a nationwide comedic empire with the character “Dolemite.” Eventually, Moore decides to film a movie using the Dolemite character.

While I won’t say this is Eddie Murphy at his best, (I reserve that opinion for the film Mr. Church), Murphy is definitely the same charismatic leading man he’s always been, and he doesn’t miss a beat.

Keegan-Michael Key, Craig Robinson, Mike Epps, Da’Vine Joy Randolph, and Wesley Snipes round out the main cast of characters. Each and every one of them compliments Eddie Murphy’s talents and help make this movie shine. The cinematography amazingly recreates 1970s Los Angeles. The writing and direction expertly recreate iconic scenes from the Blaxploitation film Dolemite, as well. Other than some small pacing issues, there isn’t much to complain about with this movie.

There is one final thing I want to mention about this film before I offer my Plotaholics Rating:

Rudy Ray Moore has been called the Godfather of Rap due to his portrayal of Dolemite. This is something that so many people probably fail to remember, which sad. Moore brought so much to the world that we still enjoy, and he doesn’t receive the credit he deserves. I truly hope this film finally sheds some light on his greatness.

The story is relatively simplistic: a man wants to be great, but can’t make it until he gets an idea from someone else and makes it his own. It isn’t a great film, but it is enjoyable and funny. For those old enough to remember Dolemite, great memories are on the way. After watching this film, I suggest going to Amazon Prime to watch the original Dolemite with Rudy Ray Moore. It is so ridiculous that it’s impossible to not love it!

I give Dolemite Is My Name a 2-shot rating. The performances of Murphy and the rest of the cast will offset any glaring issues, but that doesn’t mean those issues don’t exist.

1 comment on “Next Stop on the Eddie Murphy Comeback Tour: DOLEMITE IS MY NAME”